The marathon is a fleeting tribe that comes together to practice instinctively the ancestral and vital activity of humans, namely persistence hunting.

The Marathon Is a Fleeting Tribe!

It’s the biology, tupid! Millions of years of evolution of human species have created a body perfectly designed for barefoot running, including on asphalt, contrary to popular belief.

The marathon is a fleeting tribe that comes together to practice instinctively the ancestral and vital activity of humans, namely persistence hunting. Alas!, most participants are mistakenly convinced that they’re accomplishing a feat although we’re the worst runners of all human species, not to mention the running injuries that result from wearing shoes.

The athletes who participated in the ancient Olympic Games in the cradle of Western civilization were naked. And the first barefoot marathon runner, Abebe Bikila, defeated his shod competitors and broke the world record. Sadly, he later agreed to wear sneakers, and he ended up becoming the first legendary victim of the devastating effects of shoes, when he sustained the serious injuries that spelled the end of his running career. And like him, more and more people are being forced to stop running because of injuries to their feet, legs or spine.

Running a marathon with shoes can lead to guaranteed injury and pain.

Running marathons is not about pushing limits or proving yourself. It’s about instinctively reconnecting with the vital human activity that we should never have stopped practicing, and for which our body is perfectly designed: barefoot long-distance running, including—contrary to popular belief—on asphalt.

That means that doing a marathon with shoes is tantamount to taking the way to guaranteed injury or pain. Our ancestors efficiently ran barefoot for three million years to catch other animals for food, and they developed during that time the perfect barefoot running machine we inherited from. Shoes act therefore like a bug in the system.

Here’s an excerpt from my book Running Barefoot for Human Survival:

“Our body is perfectly designed for long-distance barefoot running. Incorporating artificial components, like shoes, jeopardizes the perfect biomechanics of the neuromusculoskeletal system. Therefore, running with sneakers may prove unsustainable, because of the resulting repeated damages, ranging from foot blisters and broken toenails to serious joints, bones, tendons and muscles injuries, which, sadly, are forcing an increasing number people to stop running for good.”

For most people running with shoes, their body can cope on distances from 5 km to 10 km, but not on longer distances, which makes even the half marathon a tough experience for many shod runners. As for the marathon, we can easily see the damage during the second half of the course, and much more after the finish line.

The 2019 New York Marathon and the Dash to the Finish Line 5K, held the previous day, were good examples of the impact of running with shoes. I did both races on my bare feet, crossing the finish line in Central Park fatigue, pain and injury free. I had also run barefoot in the Park for the media.

Most, if not all the 10,344 finishers of 5K race did not sustain any major injury. But what about the 53,513 finishers of the marathon?

Well, when I saw many of them wearing those expensive “fast shoes,” I knew that it was the wrong way to reconnect with the ancestral persistence hunting. By the way, the New York Marathon is surprisingly an almost perfect reenactment of persistence hunting. It’s therefore a very sought-after tribal experience. So people came from all over the planet to form the world biggest tribe of hunters.

We were transported in the early hours of Sunday, November 3, to Fort Wadsworth, Staten Island, where we were divided into three tribes, according to the color (blue, orange and green) of our tribal IDs, that modern humans call “bib numbers.” We joined the corresponding “start village” to wait for the launch of the great hunting through the boroughs of New York.

I belonged to the blue tribe, so I gathered with the other members of my new tribe in the “Blue Village,” which we called home for few hours. It’s worth highlighting that the term “village,” an instinctive reminder of our roots, is frequently used by marathon organizers and runners.

The three tribes started the hunting in waves from three locations, ran on the Verrazzano Bridge to Brooklyn, joined a common course after eight miles (12.9 km), continued to Queens, crossed the Queensboro Bridge to Manhattan, headed north to Bronx, then came back to Central Park to cross the Finish Line and get the immense human reward—the endorphins that make us naturally feel elated. Each successful hunter, aka finisher, received afterwards the prey, he or she had chased on 26.2 miles (42.2 km): the medal that some instinctively bite, as if it were a real prey. It’s the hunting trophy many are so proud of.

But, while the hunters were feeling so happy for their achievement, so many of them had so much suffered on the course, and would likely keep suffering for days or weeks. That means, if our ancestors were wearing shoes, they wouldn’t be able to hunt as often as it was necessary to get enough food to survive. So we wouldn’t be here today, arguing about barefoot running.

As for me, I hunted on my bare feet, like our ancestors, and completed my 8th barefoot marathon in 8 weeks like the 7 previous ones, i.e. fatigue, pain and injury free, in a time of 4:40:13. So I was ready to do it again right away, if it were necessary. In other words, it was like what it should always be: a pleasant walk in the park. I was wearing an unusual West-African outfit called chaya. A like-minded barefoot runner, Brynda Mara, also did the race in “tribal garb.”

Some may argue that my time was not fast enough. But I finished in the first half of my age group (60–64), and faster than over 22,000 hunters. Moreover, the pavement in New York proved to be very challenging for new barefoot runners. For instance, three weeks earlier, I ran the 2019 Chicago Marathon on my bare feet in a time of 3:57:23, i.e. over 7 minutes faster than my Boston Marathon qualifying standard. And I ran on September 23, 2018, in Montréal, my first barefoot marathon in continental North America, completing the race in a time of 3:37:41, and beating my Boston Marathon qualifying standard by over 27 minutes.

Since marathon running is a modern form of a tribal activity, the right way to do it is the tribal way, i.e. on our naked feet. And, for that, we don’t even need to take the shoes off, we just don’t put them on.

We can then proclaim, proudly, that WE ARE THE TRIBE! 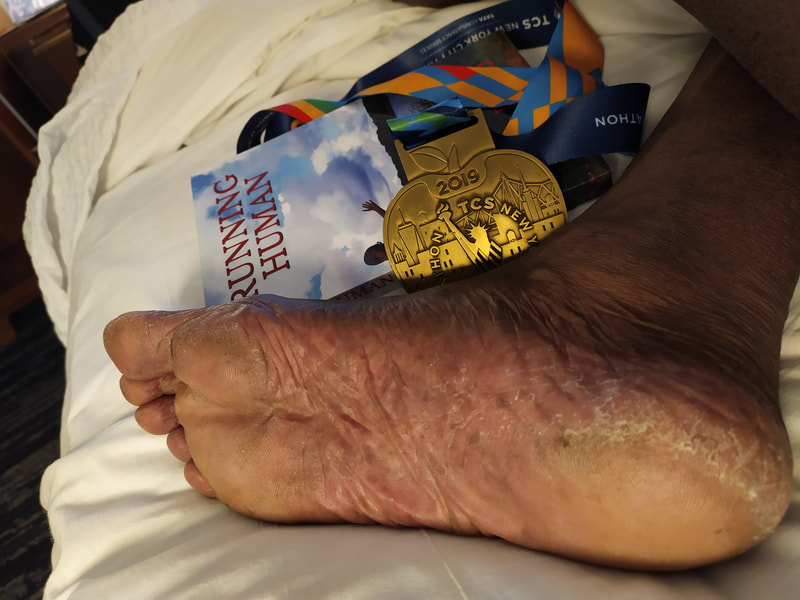 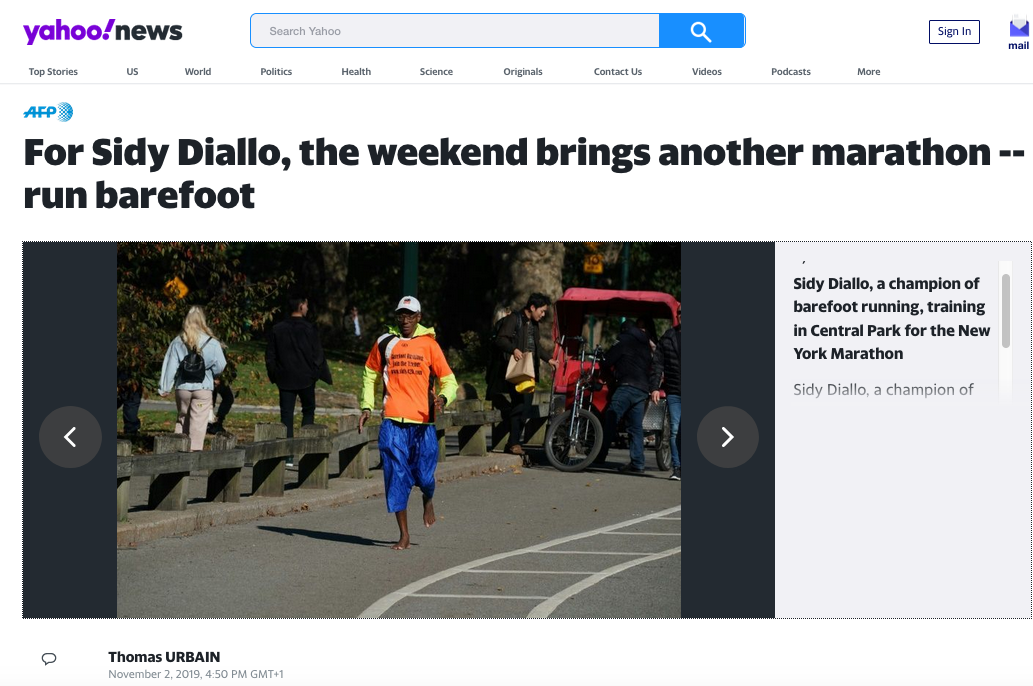 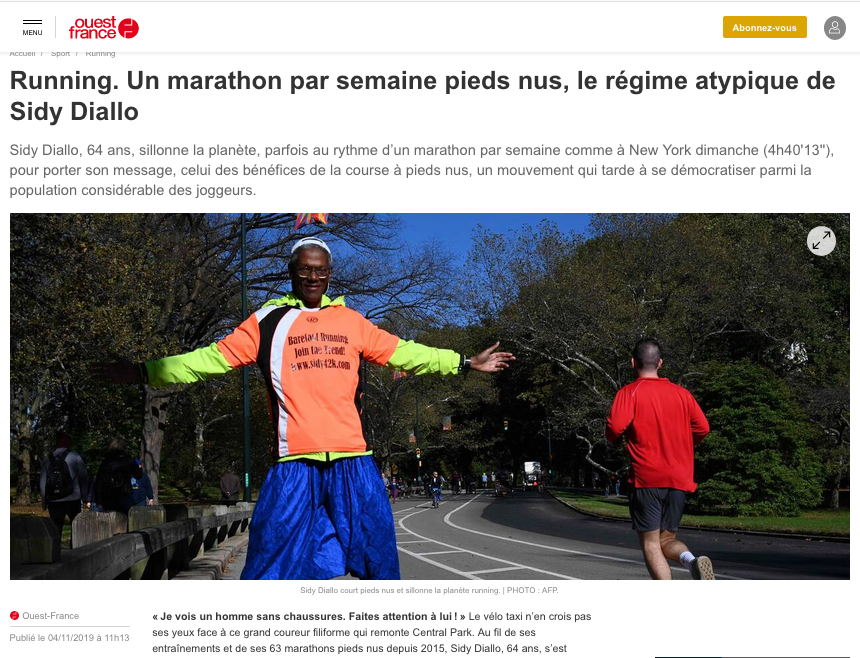